The Slaughter Has Begun

Every year from September to May thousands of dolphins and small whales are brutally slaughtered in Japan. These mammals are herded into coves or lagoons using a system of metal poles, which are used to bang together creating noise to disorient the dolphins by creating a “wall of sound” and not allowing the dolphins to communicate with one another. They are forced to swim away from the sound and into coves to be killed. The hunters then bind the dolphins once they are in the shallow water. This in itself can cause serious injury to the dolphins, but is not enough for the killers, who also use large metal rods to stab the dolphins spinal cords. Dolphins do not die right away from these injuries and instead they slowly die from internal bleeding or by drowning in their own blood (CNN.com, 2014). 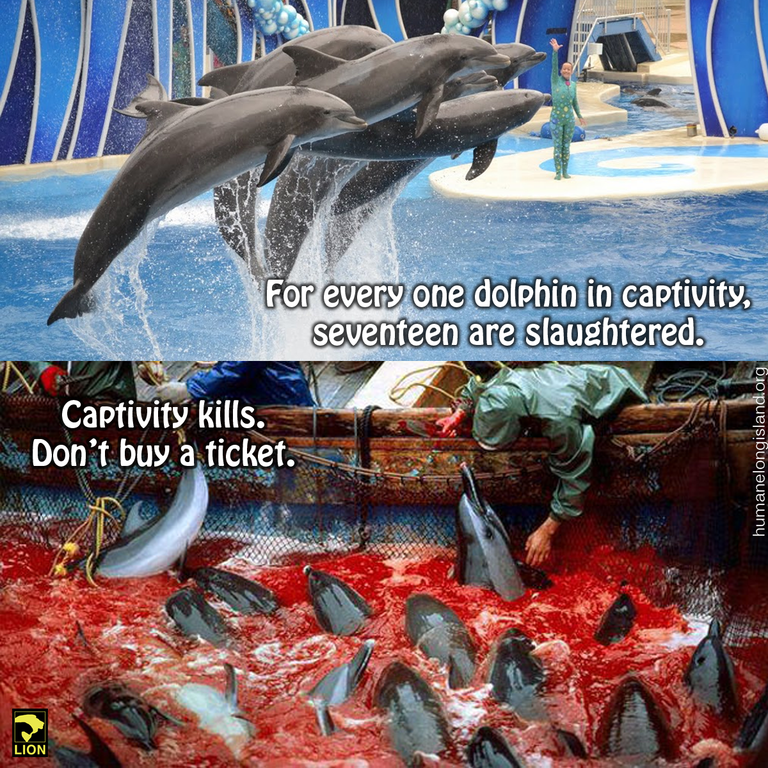 Not all dolphins herded into these coves are killed, however. Some of the young mammals are hand-picked by marine mammal trainers and pre-selected to avoid slaughter. These individuals must watch as their entire families are slaughtered right in front of them. Dolphins sold dead as food bring in a decent sum, but a live dolphin being sold to be trained can be sold for up to $200,000 each. The trainers have been witnessed assisting in the capture of dolphins by helping the hunters wrangle them.

The dolphins who are sold off to trainers are then transported to marine parks and forced to perform tricks in sea circuses and abusement parks internationally. They are confined in captivity and separated from their families and homes where often they live dramatically shorter lives, suffering health complications and psychological complications that come along with being kept in artificial tanks.

Despite an international moratorium on whaling, the International Whaling Commission (IMC) has awarded no protection for many of the dolphin species, and therefore the hunters in Japan argue that the IWC has no authority over these hunts. Additionally, Japan claims they are “drive hunting” these animals for food, and that the practice of doing so is a cultural right (Oceanic Preservation Society, 2015). Many conservatives argue that this is a live captive dolphin sale and Japan simply uses the excuse of it being a cultural practice to avoid the negativity surrounding their unethical practice. A conservation group known as the Sea Shepherd Conservation Society have a strong presence at this slaughter, and run a live feed broadcast from the shore in order to bring social media awareness to this issue. They feel that since this method of “drive hunting” dolphins can't have existed centuries ago, the claim Japan has of it being a cultural practice is bogus. Even using the excuse that this was a cultural practice does not change the fact that these animals are not needed as a food source for survival and therefore it is no longer necessary to hunt them at all.

September starts today and while many of us were sleeping, Taiji hunters very well may have started hunting these pods of beautiful families herding them into the “killing coves” already. The ones that will not be killed will be forced to perform tricks for onlookers’ entertainment as their trainers who helped capture them and kill their family continue to demand of them.  The marine life captured to put on a show purely for entertainment have suffered through being ripped from their families and forced to live a life nature never intended. We cannot let another year and any more lives be wasted away to this horrible practice.

You can make your voice heard. Take action here.