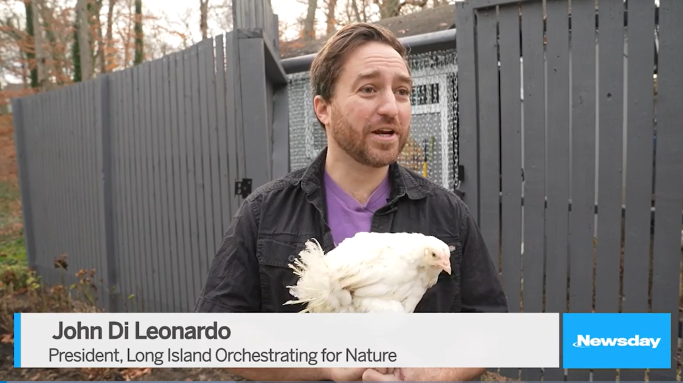 For the past three years, the Town of Babylon has been considering slashing its setback for keeping fowl from 100 feet to 10-15 feet, a change that would not only allow nearly everyone in the town to keep birds in cramped, filthy spaces without adequate space to roam, forage, and enjoy their lives, but would also create an unprecedented number of birds abandoned within the township – birds that Humane Long Island, not the township, rescue, rehabilitate, and rehome.

During this same period, LION has attended both private and public meetings urging Babylon fowl keepers to get into code and vigorously opposed any reduction in Babylon’s setback, arguing that if the law should be changed at all, it should not only hold the current setback but require additional common-sense protections, such as predator-proof and climate-proof housing, pools or ponds for waterfowl, and a ban on the acquisition of baby birds under two months of age in order to reduce impulse buys and the acquisition of roosters and unsafe ratios of male to female ducks.

LION has also continued rescuing dozens and dozens of domestic ducks, roosters, hens, pheasants, and domestic geese abandoned within Babylon township – some of whom suffered from staph, parasitic, bacterial, and fungal infections, collapsed eyeballs, egg yolk peritonitis, predator-attacks and more. Just last month, we also worked with Inside Edition on an undercover investigation to expose the Barn Pet & Feed Store for illegally selling underage ducklings and chicks in quantities less than 6 ahead of Easter. This Babylon poultry dealer previously served as an “expert” for those petitioning to change the code. We also erected a billboard around the corner reminding the public that animal exploitation breeds killer diseases and to keep animals off their plate and out of their classroom.

LION is urging those in violation of town code to get into code immediately and reminding residents that fowl abandonment is a crime punishable by a $1,000 fine or a year in jail. Responsible fowl-keepers who are operating within code will not be affected by this decision.