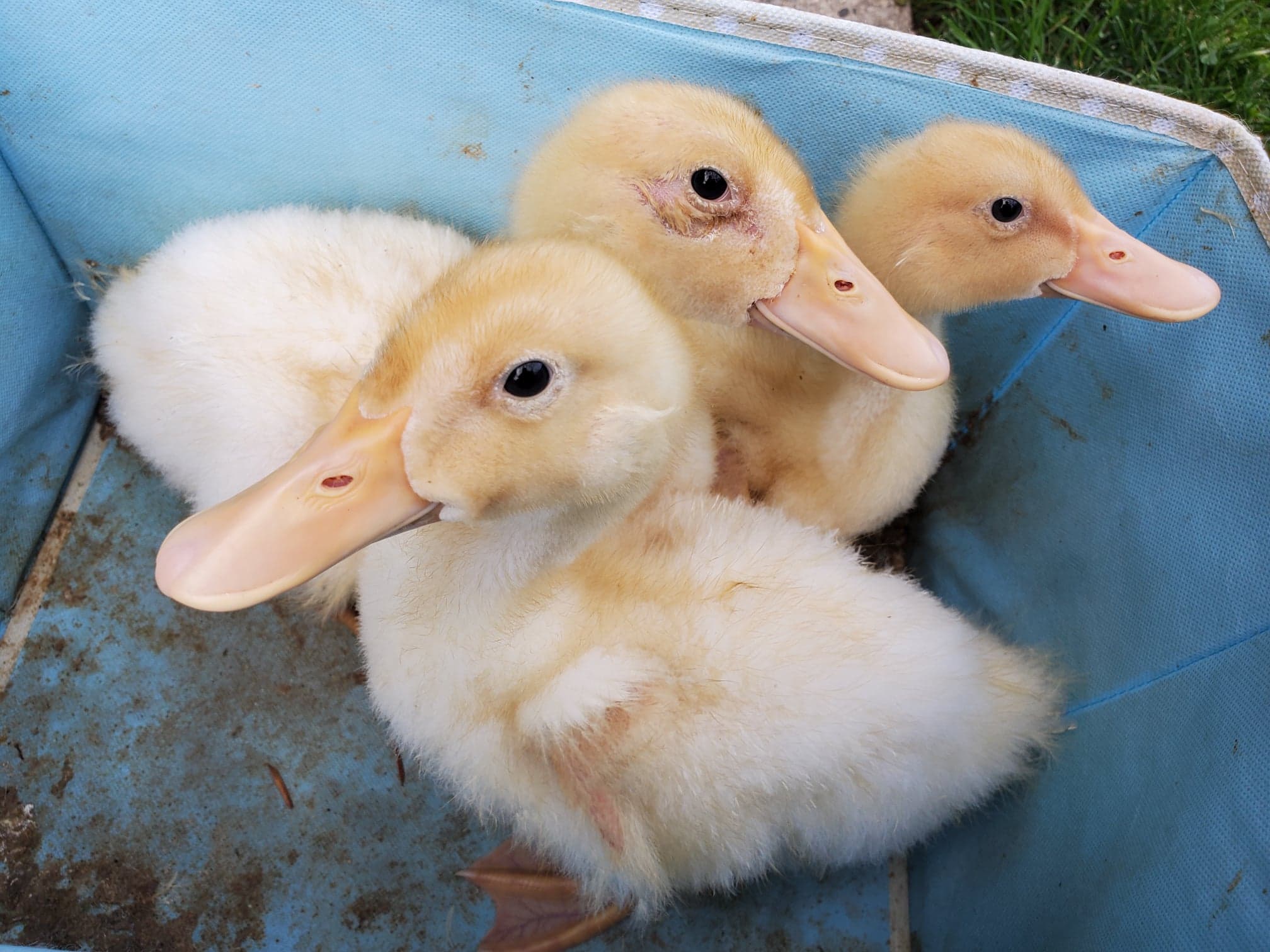 Every year, Humane Long Island rescues hundreds of domestic ducks, roosters, and other fowl cruelly and illegally abandoned to the wild on Long Island, often following school hatching projects or Easter photoshoots. They suffer from frostbite, fungal and bacterial infections, and are riddled with parasites. This is not only tragic for the birds; it can also be disastrous for ecosystems.

What are domestic ducks and where do they come from?

Just like our companion and farmed animals, domestic ducks were domesticated by humans thousands of years ago. Years of selective breeding have produced animals vastly different from their wild counterparts, both physiologically and psychologically, just like dogs and wolves. Bred for either egg or meat production, domestic ducks have tiny wings, large bodies and generally no camouflage. They typically cannot fly, and they can never migrate — literally sitting ducks for predators and cruel people when abandoned to the wild. 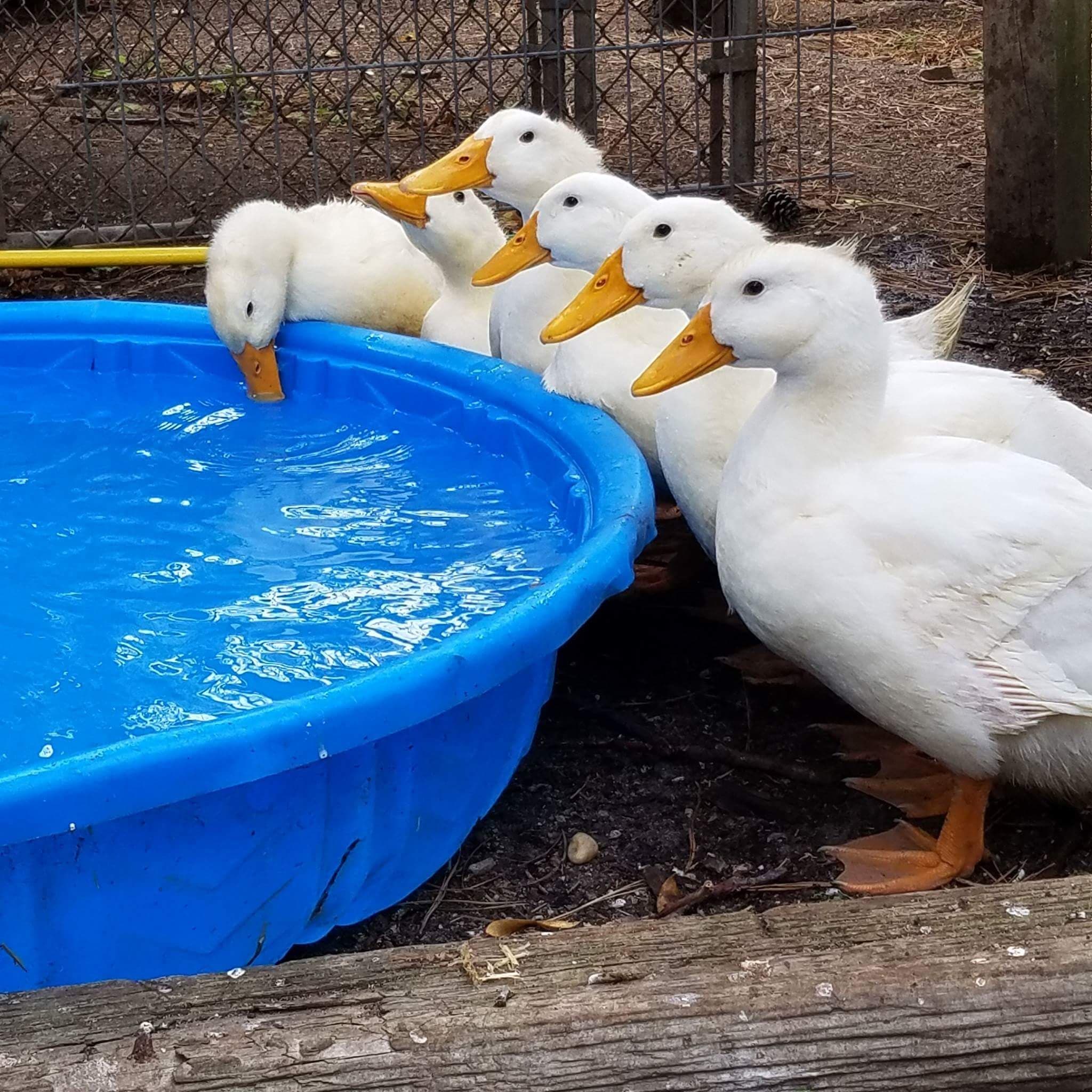 Domestic ducks are as different from wild ducks as a house cat is from a tiger.

Domestic ducks lack the survival instincts of wild birds; many were raised in incubators and never learned even limited skills from their mother. When abandoned on ponds, they do not know how to forage for naturally occurring food and often starve to death. They are routinely attacked and killed by predators, including raccoons, foxes, snapping turtles, and cruel humans. Most die within the first few days of being dumped. If they make it until winter, they face diminishing natural food sources and frozen ponds and cannot migrate to find water. These abandoned animals often become frozen in place on the ice. Those who don’t freeze to death, die of dehydration or starvation, or are rounded up and gassed by USDA’s Wildlife Services. 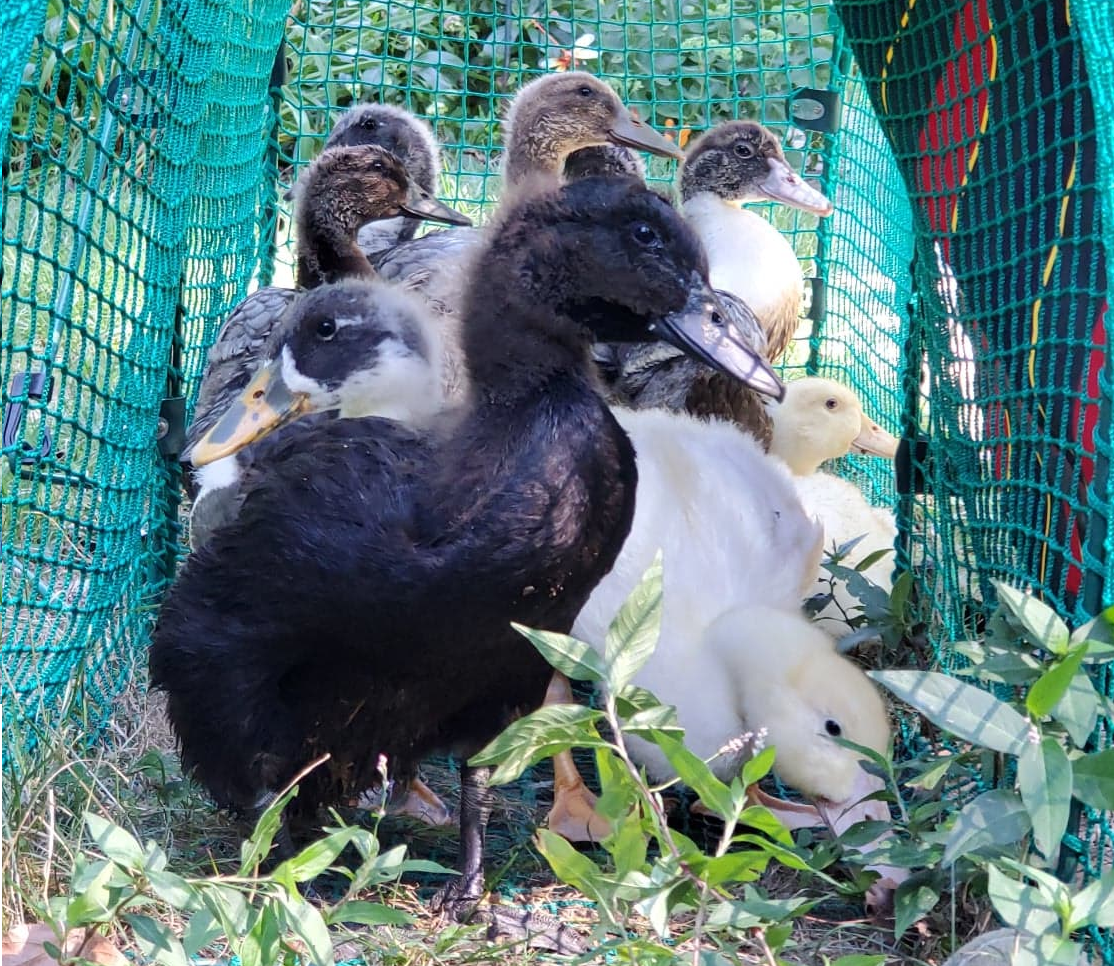 Harry, pictured above, was one of nearly one hundred domestic ducks Humane Long Island rescued from Baldwin Harbor between 2020 and 2021. When we found Harry, she was suffering from a bacterial eye infection as well as wry neck, niacin deficiency, and angel wing, a trifecta of developmental disabilities. After several months of successful rehabilitation, Harry found her forever home with one of our board members in Virginia until she passed away peacefully a year later due to complications from her initial neglect.

When introduced into nature, non-native species disrupt natural ecosystems, which rely on the migratory behavior of wild ducks and geese and the natural recovery period that comes with their absence. As domestic waterfowl eat not only the roughage of plants but their entire root structure, native plants are particularly at risk from starving ducks who eat voraciously trying futilely to meet the calories they need to survive once abandoned.

Domestic waterfowl can also spread disease to native species, including HPAI, West Nile Virus, E. Coli, and Salmonella. Should these domestic ducks and geese breed with wild birds, their offspring will likely be flightless as well, further disrupting the ecosystem and exposing the young to the same dangers as their domestic parent. The National Park Service has noted that “threats from invasive species play a critical part in [the] loss of native biodiversity,” and recognizes that "invasive species" frequently “start out as pets.”

The curious case of Muscovy ducks 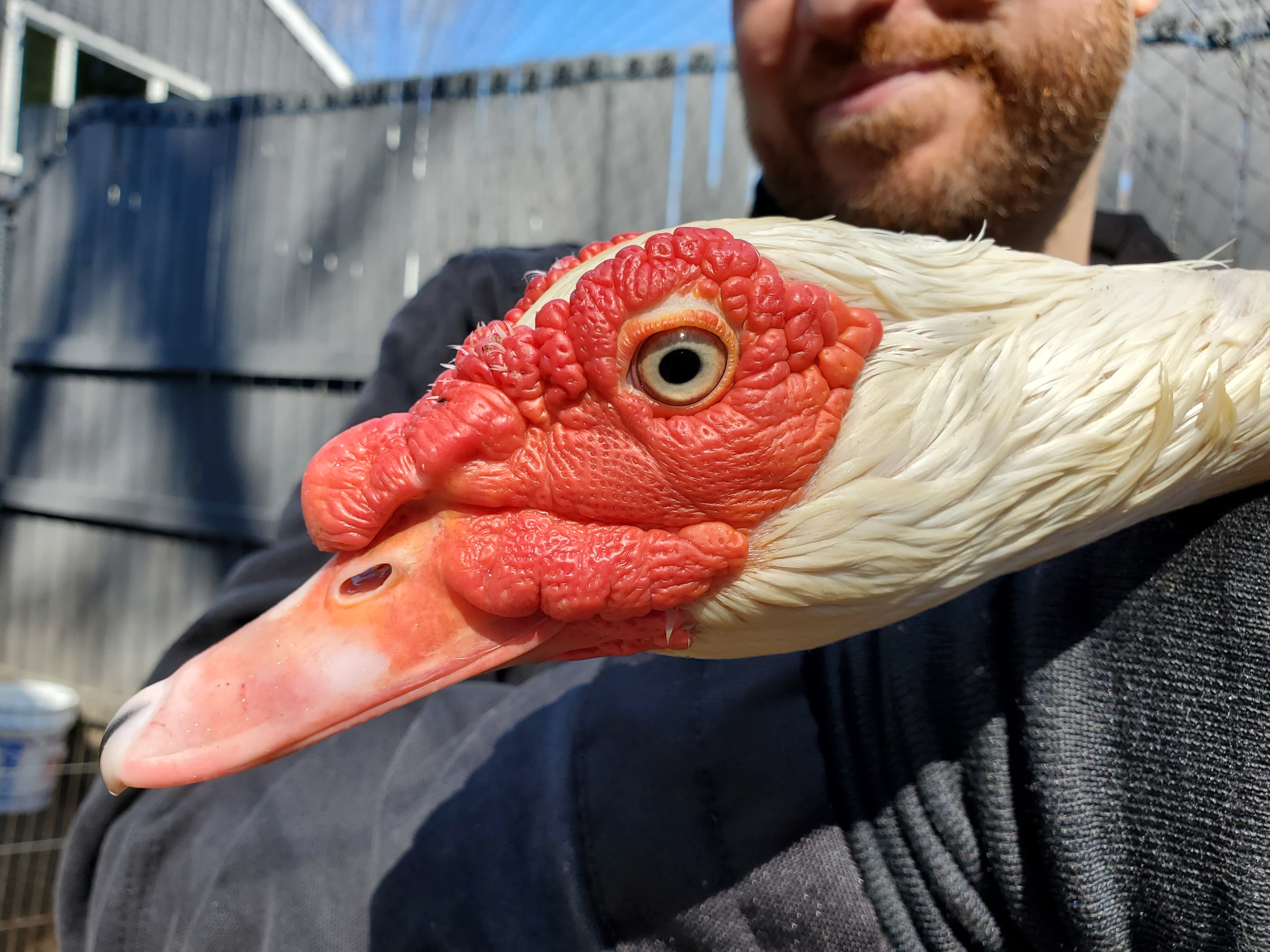 Only two species of ducks have been domesticated: the Mallard (Anas platyrhynchos) and the Muscovy Duck (Cairina moschata). Mallard varieties, include Pekins, Runners, and most domestic varieties, while Muscovys are distinguished by their red masks (called caruncles).

While domestic Muscovy ducks are generally better flyers than domestic Mallards, they similarly cannot migrate. Being native to South and Central America, they may suffer hypothermia and loss of extremities to frostbite when abandoned in the United States and Canada and are often rounded up and killed when abandoned in warmer states where they’re considered "invasive".

Desertion of chicken, peafowl, and other domestic animals

With the public becoming increasingly concerned with conditions on factory farms and the price of meat and eggs soaring as farms “depopulate” birds to minimize losses during the COVID-19 pandemic and the 2022 Highly Pathogenic Avian Influenza outbreak, suburbanites have been “panic-buying” chicks like they did toilet paper, resulting in a drastic increase in their need for rescue.

Most people may be surprised to learn that red jungle fowl —the wild variety of chickens pictured below — weigh little more than a pound and naturally lay only about 10 to 15 eggs a year in a single clutch. Native to India and Southern Asia, they lack adequate feathering to survive Northern climates and cannot defend themselves against North American predators. 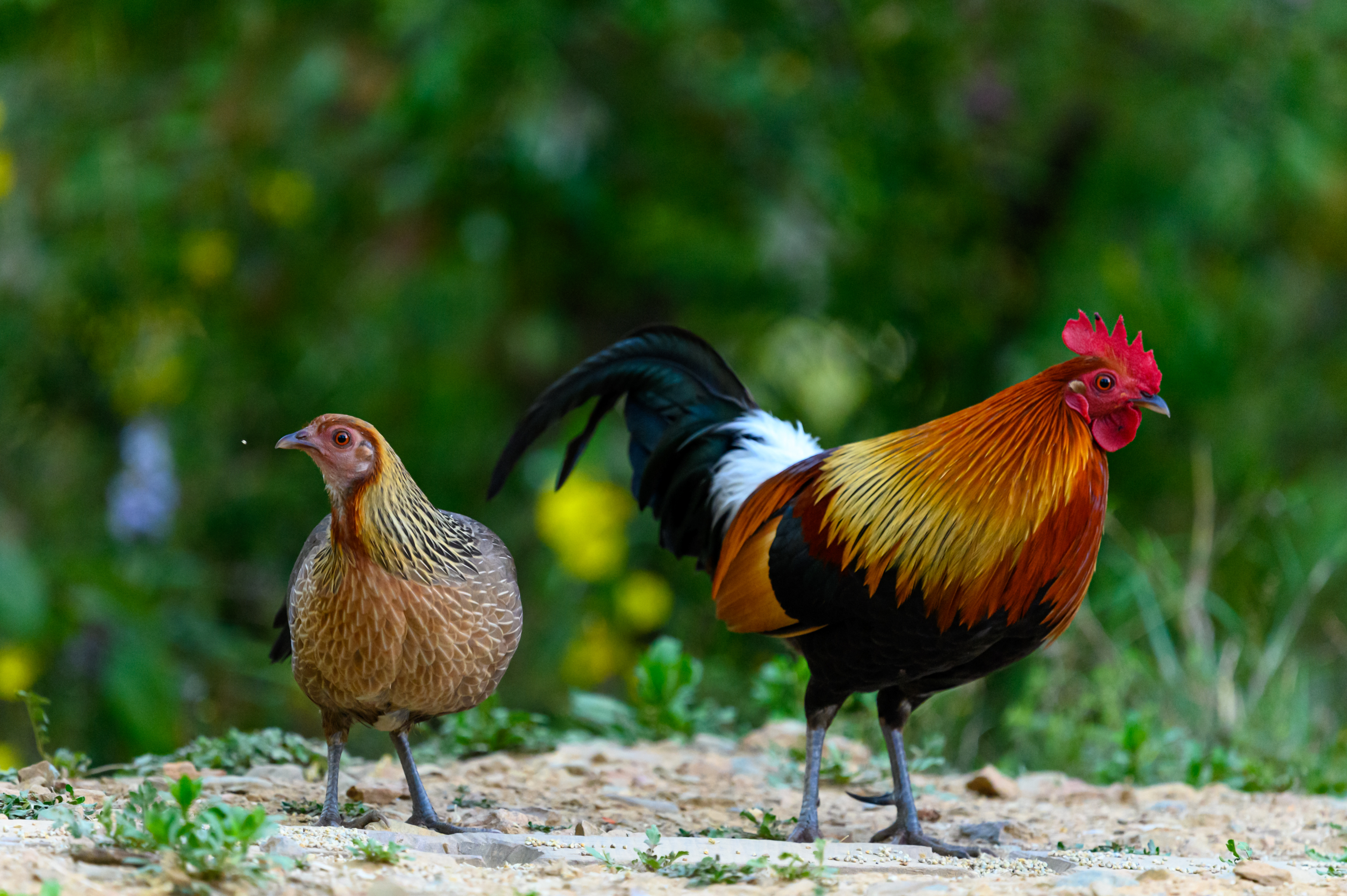 Like domestic ducks, domestic chickens have been inbred for thousands of years to rid them of wild instincts and flight capability while also giving them characteristics detrimental to their health but favorable to the agribusiness industry.

Chickens raised for their flesh, called “broilers” by the chicken industry, are prone to morbid obesity, while hens raised for their eggs, called “layers”, may lay more than 300 eggs in a single year, and the stress on their reproductive systems is often fatal. Chickens can live to be more than 10 years old, however, with medical treatment exceeding the cost of an egg, many chickens are killed or left to languish when their egg production slows after the first 2 years, and some are even abandoned to public parks and sumps where they succumb to predators or the elements. With many buyers not realizing that chicks won’t be mature enough to lay eggs for six months after purchase, some hens are abandoned before they even lay a single egg.

Roosters are excellent husbands and fathers, keeping a watchful eye over their families and defending them against perceived aggressors. Unfortunately, their protective nature is often misunderstood, and this combined with the fact they cannot lay eggs, causes roosters to often be abandoned as soon as their gender is revealed. This issue is compounded by their crowing, which makes them unwelcome in most urban — and even many suburban — environments.

While roosters are doting and fierce protectors of their flock, domestic chickens — like domestic ducks — have been bred to have large bodies and small wings, and most are unable to fly away from predators. In most cases, their naturally large spurs have been bred out of them, taking away their last line of defense as well.

Peafowl, pheasants, and other domestic fowl 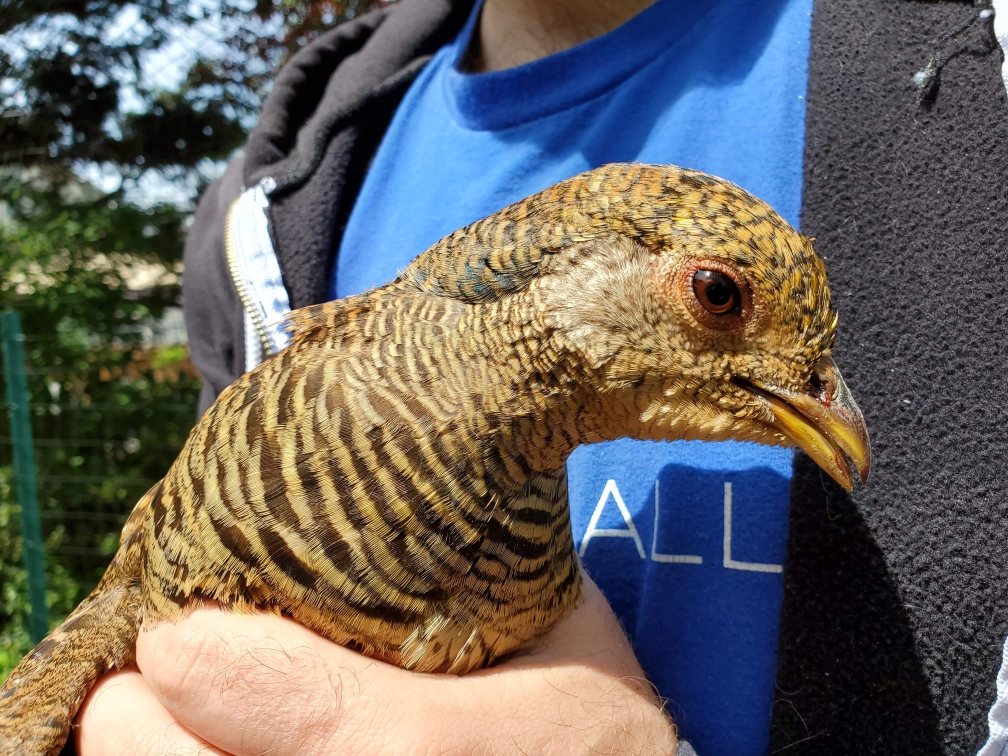 Purchased either as yard ornaments or tick-control, peafowl, guineafowl, and quails are often released to gardens without proper housing or care. Their loud squawks and tendency to scratch cars while looking at their reflections may lead angry neighbors to kill them and, in some areas, they have been subjected to lethal roundups by USDA’s Wildlife Services.

If left alone, these birds often succumb to the elements, are hit by cars, or die from parasites they have no natural immunity from. The female pheasant pictured above was rescued in Babylon after being found with serious fungal and bacterial infections. She unfortunately succumbed to her illness after a month in intensive care.

How You Can Help

Never leave a domestic bird behind.

If you spot a domestic duck, chicken, or domestic animal abandoned to the wild, never leave them alone. By the time you contact a rescue group it may be too late, as it was for this mama duck pictured below. If you find domestic fowl abandoned on Long Island or New York City or domestic ducks abandoned anywhere else in North America, stay with the animal and contact us at 516-592-3722. For other domestic animals, please call your local shelter or SPCA. No matter what, do not leave the animal until help arrives. 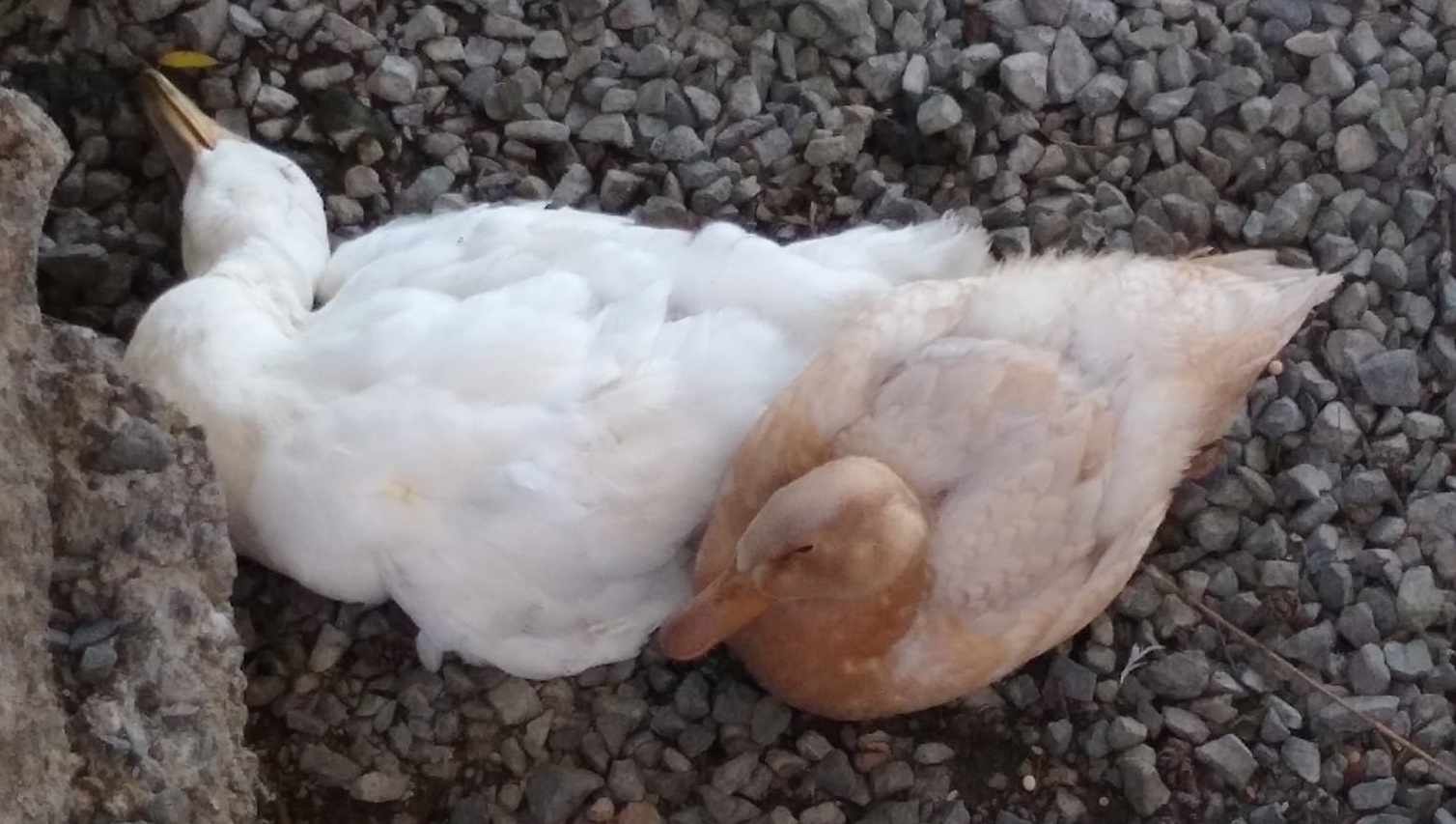 This domestic duckling was found clinging to her deceased mother after being abandoned at a California Lake. After this image was posted in an international pigeon rescue group, Humane Long Island’s Duck Defenders project walked the duckling’s finder through her rescue, supplied her with everything she needed to foster the duckling, and found her a wonderful home with a pond, friends, and predator-proof housing less than an hour away.

Hatcheries breed birds to have “desirable” traits despite any negative effects this inbreeding may have on their health. They then ship them to stores and homes across the country, often in cardboard boxes via USPS, without any food or water. A Humane Long Island investigation recently exposed that half of the infant birds in an entire shipment to one Long Island poultry store died in transit.  Mortality rates are so high that many hatcheries even provide free replacement birds in anticipation of deaths. But not all birds even make it that far.

It’s common for sickly birds to be tossed out and left to die, while baby boys, who don’t produce eggs and are seen as disposable, are often ground up while still alive.

Doing business with poultry stores and hatcheries encourages them to continue to breed, buy, and hurt fowl. Similarly, rescue groups are only able to save as many animals as their space allows, so breeding them yourself when so many are in need of homes is irresponsible. The only ethical way to obtain fowl is to adopt them from animal shelters or rescue organizations that have the birds’ best interests at heart. To adopt from Humane Long Island, please e-mail your request to [email protected] with pictures of your coop and the birds you're currently caring for.

Not only is animal abandonment cruel, but it’s illegal. Humane Long Island’s Duck Defenders project offers a reward up to $1,000 for information leading to the arrest and conviction on cruelty charges of anyone who abandons a domestic duck or other species of poultry. This offer applies to ducks throughout North America and is extended to all domestic poultry from Manhattan to Montauk.

If you've found a dumped duck or other abandoned animal, please e-mail [email protected] with pictures and details. Please be sure to check with neighbors to make sure they're not lost before contacting us.

A person being the owner or possessor, or having charge or custody of an animal, who abandons such animal, or leaves it to die in a street, road or public place, or who allows such animal, if it become disabled, to lie in a public street, road or public place more than three hours after he receives notice that it is left disabled, is guilty of a misdemeanor, punishable by imprisonment for not more than one year, or by a fine of not more than one thousand dollars, or by both.