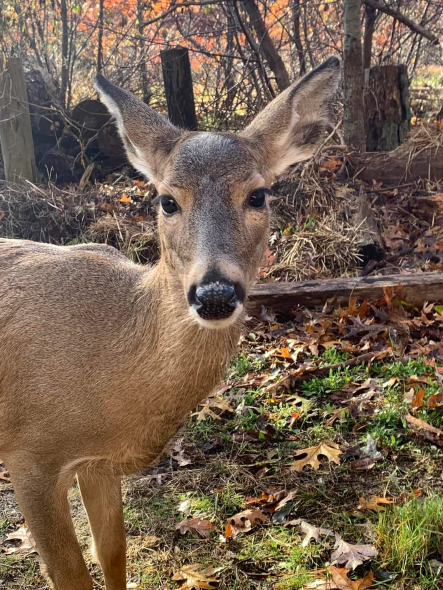 UPDATE: On December 16, 2022, Governor Kathy Hochul vetoed A. 9895/S. 9345 despite nearly unanimous support in both the Assembly and the Senate. Humane Long Island plans to work with our friends at Evelyn Alexander Wildlife Rescue Center to address the Governor's concerns and expects this bill to be reintroduced in the upcoming legislative session.

On January 4th, 2022, hunter Isidoro Scarola shot a deer within 6 feet of Evelyn Alexander Wildlife Rescue Center, the only wildlife hospital in Suffolk County, killing the deer, who was rehabilitated and released from the hospital, and blowing a hole through a wildlife enclosure, endangering the lives of recovering animals and of a worker nearby.
Since a 2003 agreement allowed hunters to cross Suffolk parkland to get to the 200-acre Henry Hollow’s Hunting Area, shots and arrows have come dangerously close to a clearly marked hiking trail and recuperating wildlife on at least half a dozen occasions, including one where a hunting stand was erected ~100 feet away from the facility's nature trail.
Following this latest incident, Humane Long Island came to the aid of our friends at Evelyn Alexander Wildlife Rescue Center and urged authorities to ban hunting at Henry's Hollow, and today, state lawmakers have passed a bill that will ban hunting on that parcel in the future.
Contact Governor Kathy Hochul to urge her to sign S9345/A9895 today.