A wannabe Joe Exotic named Larry Wallach is being taken to court by a Long Island town for operating an illegal "sloth encounter" that subjects sensitive sloths, including vulnerable babies, to grabbing hands, noisy crowds, and ramshackle cages during daylight hours when these animals would naturally be asleep.

Sloth Encounters Long Island has been plagued with county and town permit violations from the moment it opened its doors, and has been the subject of bite complaints, including one of a child just a short while ago on July 24th. Despite Town of Islip Supervisor Angie Carpenter going on record that the sloth encounter is operating illegally, Wallach has not only failed to comply with town codes but continued to collect baby sloths, recently acquiring two more while another sloth is reportedly pregnant.

Islip—which has also been in the news recently regarding an escaped lynx and an alligator in a bathtub—is now taking Wallach to court, slapping Slothencounters LTD with four court appearance tickets for possession of wild animals, occupancy of a building without fire marshal approval, prohibited use, and change of use without a permit. Islip officials also issued court appearance tickets for occupancy of a building without fire marshal approval and other code violations to Sloth Encounters’ landlord, a limited liability company called 777 Chris’s Way. Wallach pleaded not guilty through attorney John Zollo who in a statement to press made the wildly disingenuous claims that the "[sloths] are not wild animals" and that going to the former pool supply store—which keeps sloths in plastic carriers surrounded by plastic plants and chain-link fencing—is "like going to the Bronx Zoo."

On September 15th, the Suffolk County Supreme Court granted Islip a Temporary Restraining Order (“TRO”) enjoining Wallach from publicly exhibiting, harboring, or possessing wild animals within the township until further orders from the court. Rather than shutting down, Wallach has since aggressively marketed "home visits" with the sloths and begun claiming that he is going to open an even bigger store where he plans to sell sloths as pets to the public. Wallach has also been documented hauling baby sloths to residential neighborhoods within Islip in violation of the TRO and has not removed the sloths from 551 Veterans Memorial Highway, Hauppauge, NY—a former pool store not zoned for animal exhibition—as instructed by the court. A former federal prosecutor and attorney for Humane Long Island is now urging the Islip Town Attorney to pursue contempt proceedings against Sloth Encounters for these blatant violations. 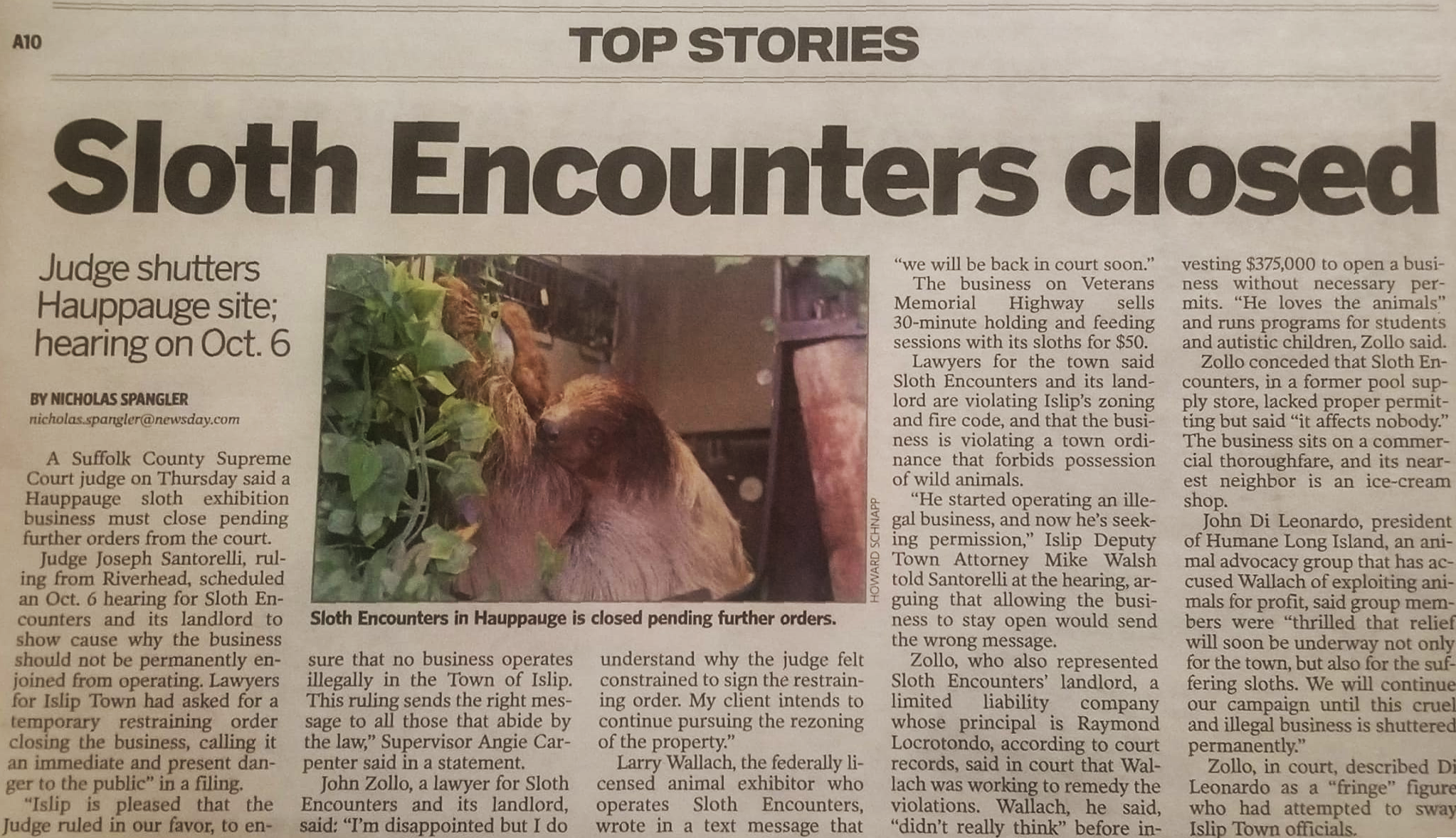 On International Sloth Day—October 20th—Wallach planned to haul baby sloths to the Bethpage Equestrian Center for "sloth selfies", however, after Humane Long Island planned a protest outside the establishment and met with the Center's owner over the phone, the Bethpage Equestrian Center canceled Sloth Encounters' appearance and agreed not to allow Sloth Encounters' to exhibit at the Equestrian Center moving forward. Oyster Bay Code Enforcement also announced plans to visit the Center on International Sloth Day to ensure sloths are not present and announced their intention to give Wallach yet another summons if they were found. 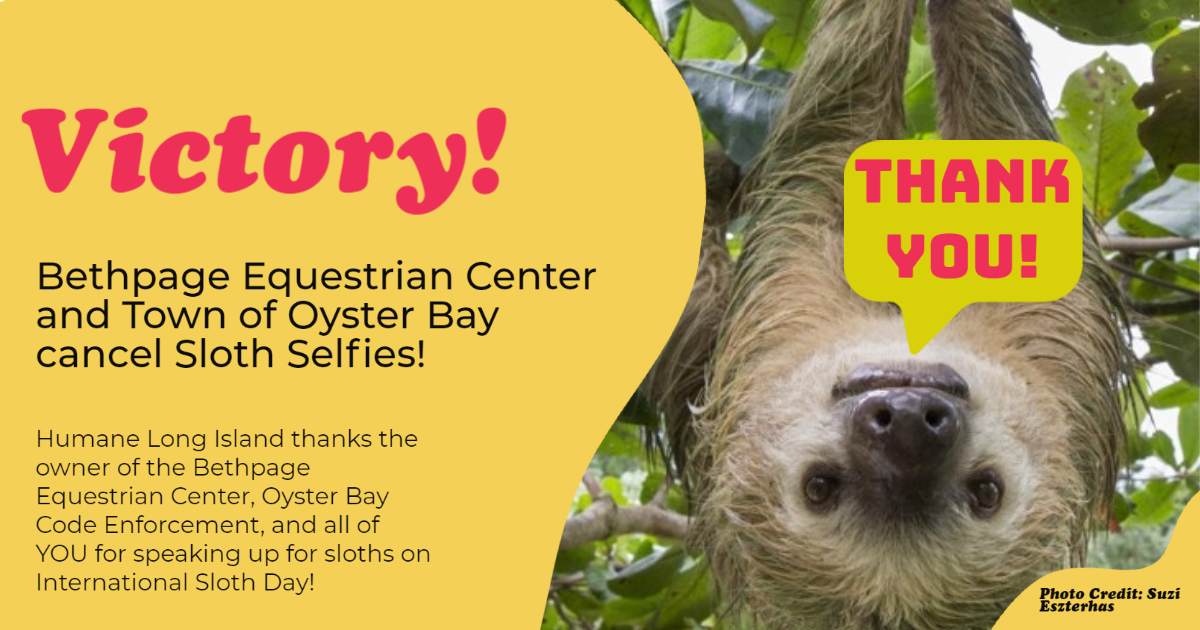 Wallach has until December 1st to respond to a permanent injunction filed by the Town of Islip in Suffolk County Supreme Court aimed at stopping him from exploiting sloths within the township. Wallach is also due in Nassau County First District Court on October 27th regarding an apparent criminal code violation in Hempstead township. 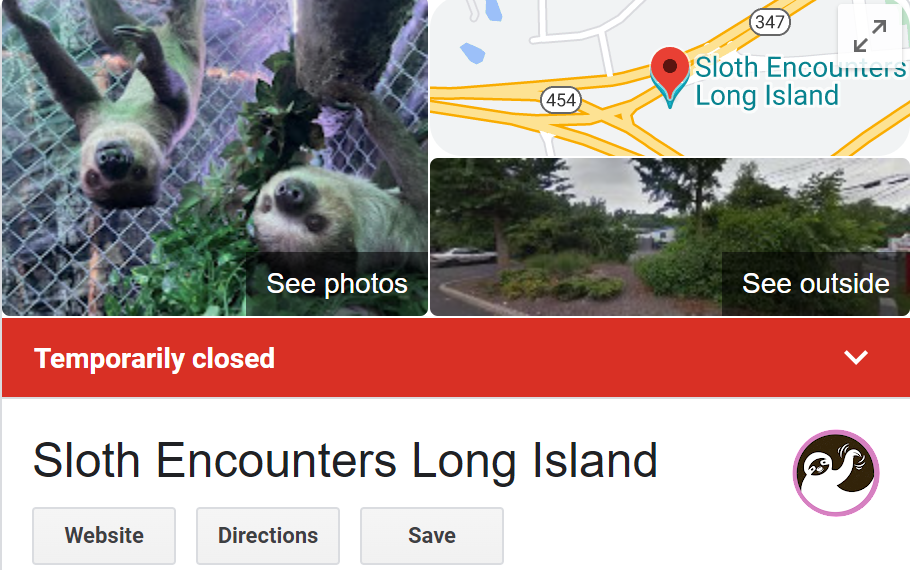 Who is Larry Wallach?

Larry Wallach has racked up more than 50 citations from federal authorities, countless local citations, and even received a 6-month suspension of his USDA license in 2013. The DEC also recently failed to renew his license to exhibit certain "dangerous animals", such as lions, tigers, and bears, following his chronic and blatant disregard for animal welfare and public safety, which is apparently why he's now exhibiting sloths who are not subject to that permit requirement.

Just last year, the U.S. Department of Agriculture cited Wallach after finding a sloth in his cluttered garage with hazards in and around the animal’s enclosure that “could injure the animal by burning, broken glass, or electrical shock.” The agency also cited a roadside zoo in Ohio after a tip from PETA that Wallach, holding an electric prod and accompanied by a dog, entered the cage of a young tiger he had dumped there after she outgrew the dilapidated cage that he had kept her in under the deck of his Nassau County residence. 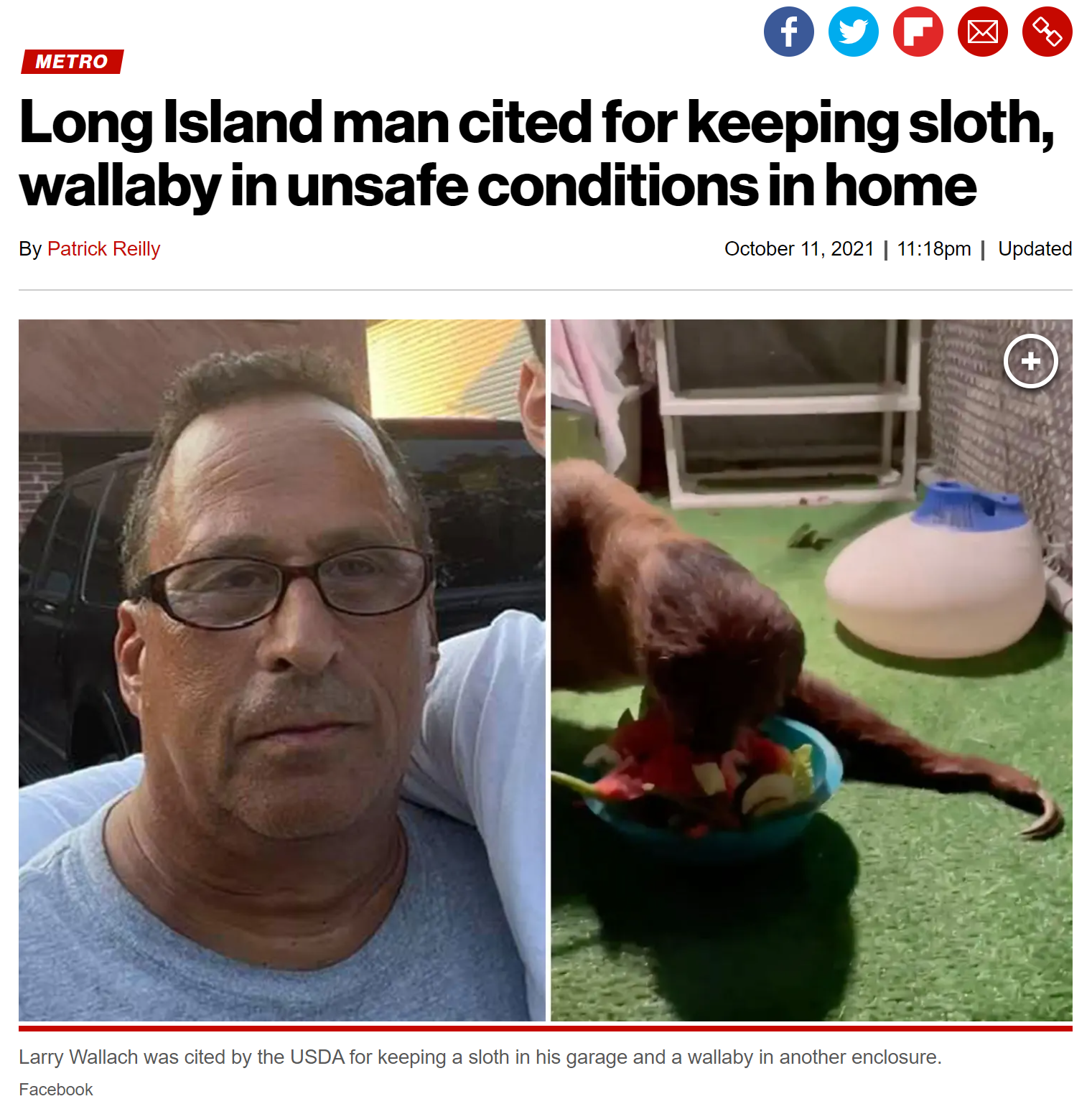 The USDA also recently cited Wallach for an incident in which he took an unrestrained tiger cub to a public park and allowed the public to pet and handle the animal. A tip from PETA last year about Facebook Live videos—one of which depicted Wallach electroshocking a young tiger named Sheba and threatening a dog with an electric prod—resulted in a slew of citations, including a "critical" citation for failure to follow veterinary instructions for treatment of Sheba’s broken toe, and further citations for confining her to an enclosure in disrepair that had broken floorboards, and putting her and a wolf at risk of injury by allowing them to interact in a dangerous manner.

Wallach also made headlines in 2017 when a Wallaby was found 20lbs underweight and in squalid conditions in his garage.

Wallach – whose father owned the now bankrupt but once $700 million a year Robert Plan Corp – once partied in yachts, Rolls-Royces, and jets with the who's who of notorious characters currently under indictment for rape, wildlife trafficking, and money laundering. He fraternized with Bhagavan 'Doc' Antle, who faced disturbing allegations of sexual abuse, violence and misconduct in the Netflix true-crime docuseries Tiger King and its sequel, Tiger King: The Doc Antle Story, including allegations from two of Antle's former wives that he began sexual relationships with them when they were 14. Antle is currently facing felony wildlife trafficking and money laundering charges linked to human trafficking. Wallach's inner circle also included disgraced porn star Ron Jeremy who has been indicted on more than 30 counts of sexual assault. Jeremy can be seen on this video encouraging dangerous interactions between a poodle and a baby tiger in a pool at Wallach's former East Rockaway residence. Yet another friend and business partner of Wallach's was Sam Mazzola, a convicted cocaine and steroid trafficker who often claimed he shot a man dead at a fair and told his employees that mobsters once paid him to use his tigers for body disposal. The USDA revoked Mazzola's license to exhibit animals in 2009 and one of his bears fatally mauled a caretaker on his property a year later. Mazzola died during a sex act involving a 17-year-old boy the following year.

Even Wallach's vet, Dr. Camilo Sierra—who is also a vet for New York City's cruel horse-drawn carriage industry—is a disreputable character, having had his license suspended twice by the New York State Gaming Commision related to corruption, fraud, and drugging racehorses, and recently served a 2-year suspended stay by the NYS Board of Regents for similar violations.

A child was reportedly bit by a sloth at Sloth Encounters: 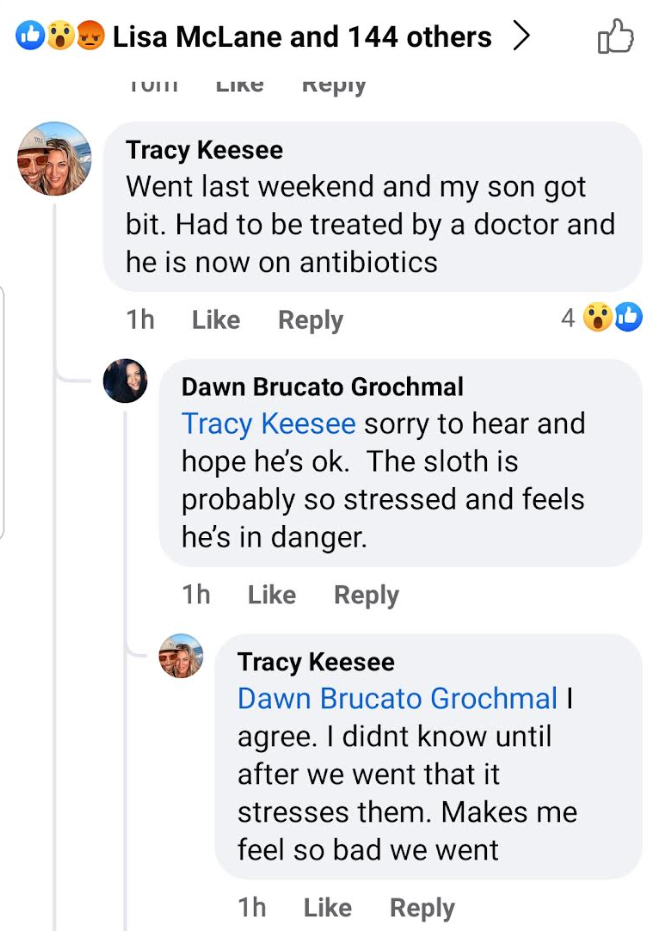 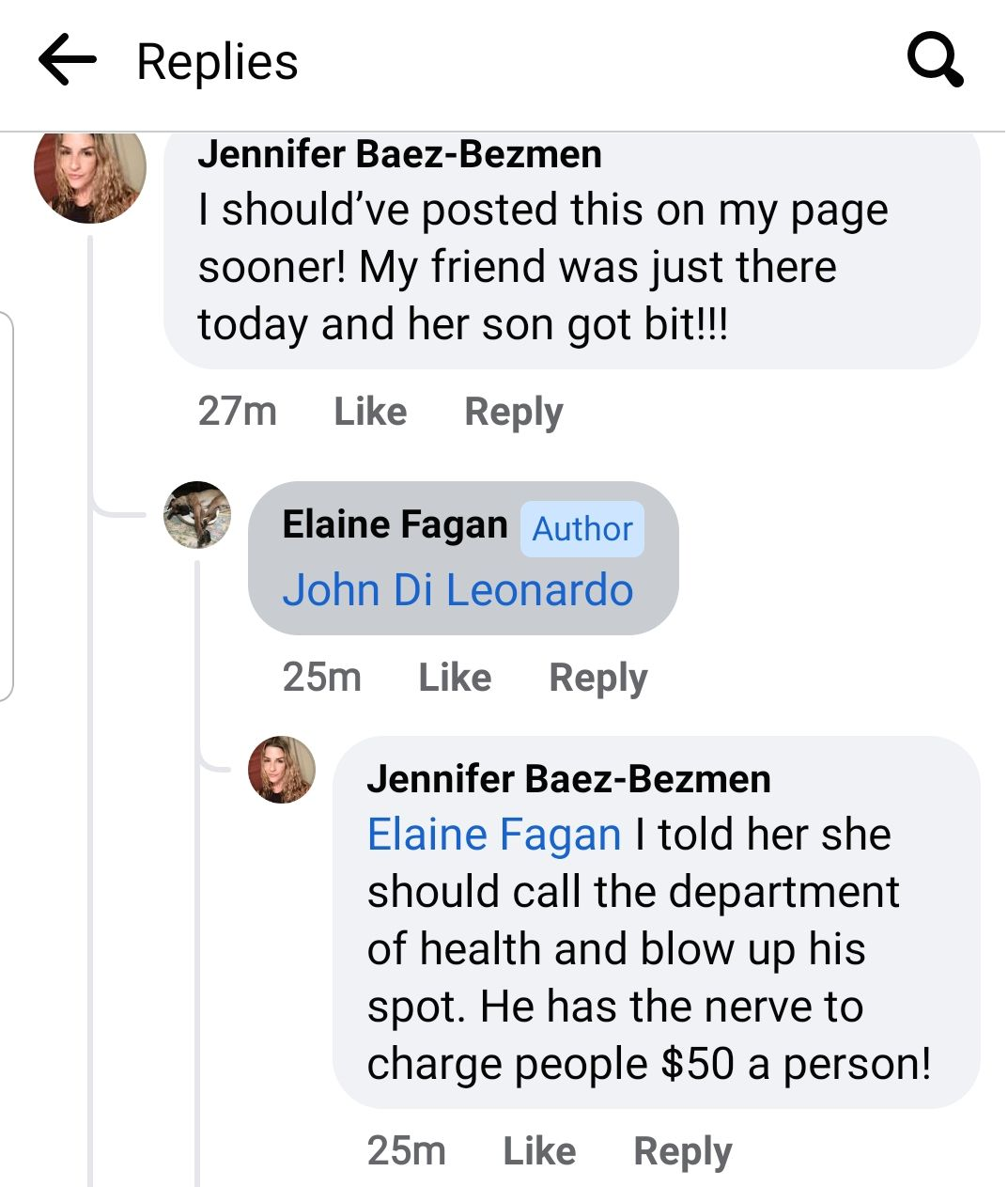 According to the father of this child, Wallach attempted to downplay the bite as a routine occurrence by saying his child was the fourth person to have been bit. 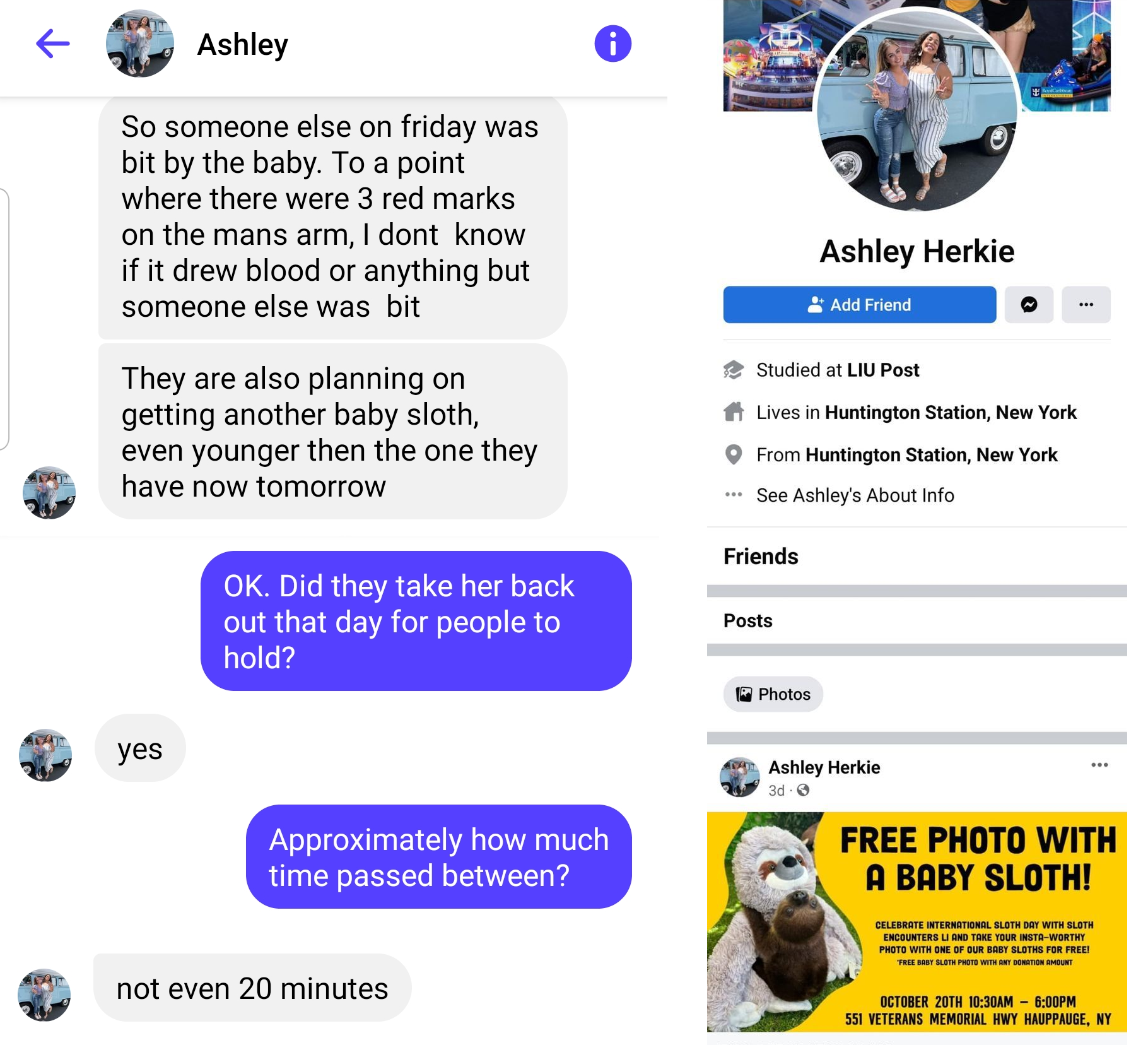 Wallach has not only denied the occurrence of these bites, but told Patch, "You get bit because you're stupid."

[Sam] had partnered up with a man named Larry Wallach to open this store and they were bringing in cubs—like a baby white lion and a baby tiger—and Larry was drugging the babies! I caught him. After I saw him drug the cub, I grabbed the baby and stuck my finger down its throat to get it to vomit the drugs up. I confronted Larry about it, but he was one of the bosses. I’m pretty sure they kept drugging the cubs after that. I think they did that so that the animals would do photo ops without resistance; but the baby animals don't need to be drugged. All Sam and Larry cared about was collecting the money that they were charging people to come in to see those animals.

David Kolins, DVM, Mineola Animal Hospital, had this to say about a wallaby found suffering in Wallach's garage in 2017:

He was pretty tame, he's incredibly hungry so he's gnawing on anything that gets in his path ... Extremely underweight, thin, no muscle mass left on him, locked in kind of like a dog cage in a garage, left to fend for himself.

There was not adequate heat in there, there was no food or water and there were feces all over.

[I'm] skeptical of most forms of animal exhibition and any form of promotion that might encourage people to keep sloths as pets ... They cost $6,000 to $10,000 to buy and they live 30 years in captivity … They don’t like to be handled.

Rebecca Cliffe, PhD, a Costa Rica-based zoologist who founded the Sloth Conservation Foundation, a non-profit dedicated to saving sloths in the wild, says about Sloth Encounters:

Allowing hands-on contact is not ethical. Sloths are a solitary species, so they’re not social and can’t be domesticated. They are the prey and humans are the predator. Sadly, their natural reaction is to stay still, which confuses people into thinking they are content with being held and touched. And there’s another entirely separate issue: the effects of social media.

The more people visiting these encounters and sharing photographs of touching and holding a sloth, the faster these actions become normalized. People then come to economically troubled countries like Costa Rica or Colombia or Brazil with a preconception that sloths are touchable and holdable, which then presents greater opportunities for exploitation.

Julie Haussman, a New York State licensed wildlife rehabilitator who visited Sloth Encounters reported being horrified when Wallach placed a baby sloth in a sling around her neck:

I think the general public isn’t aware. They think, ‘Oh great, I can hold a sloth, and they probably love it because they don’t know better. This is what Wallach preys on.

Sleep deprivation, fear, and emotional distress lower the body’s immune response, making one more susceptible to illness regardless of species. Remaining under duress for extended periods of time puts the sloths at Sloth Encounters at constant risk for illness, and doing so in close proximity to humans exponentially increases the risk of zoonotic disease, which according to the World Health Organization (WHO), are 60% of emerging infectious disease reported globally. 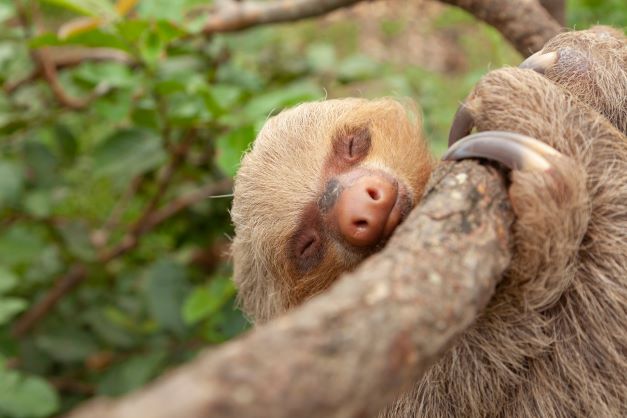 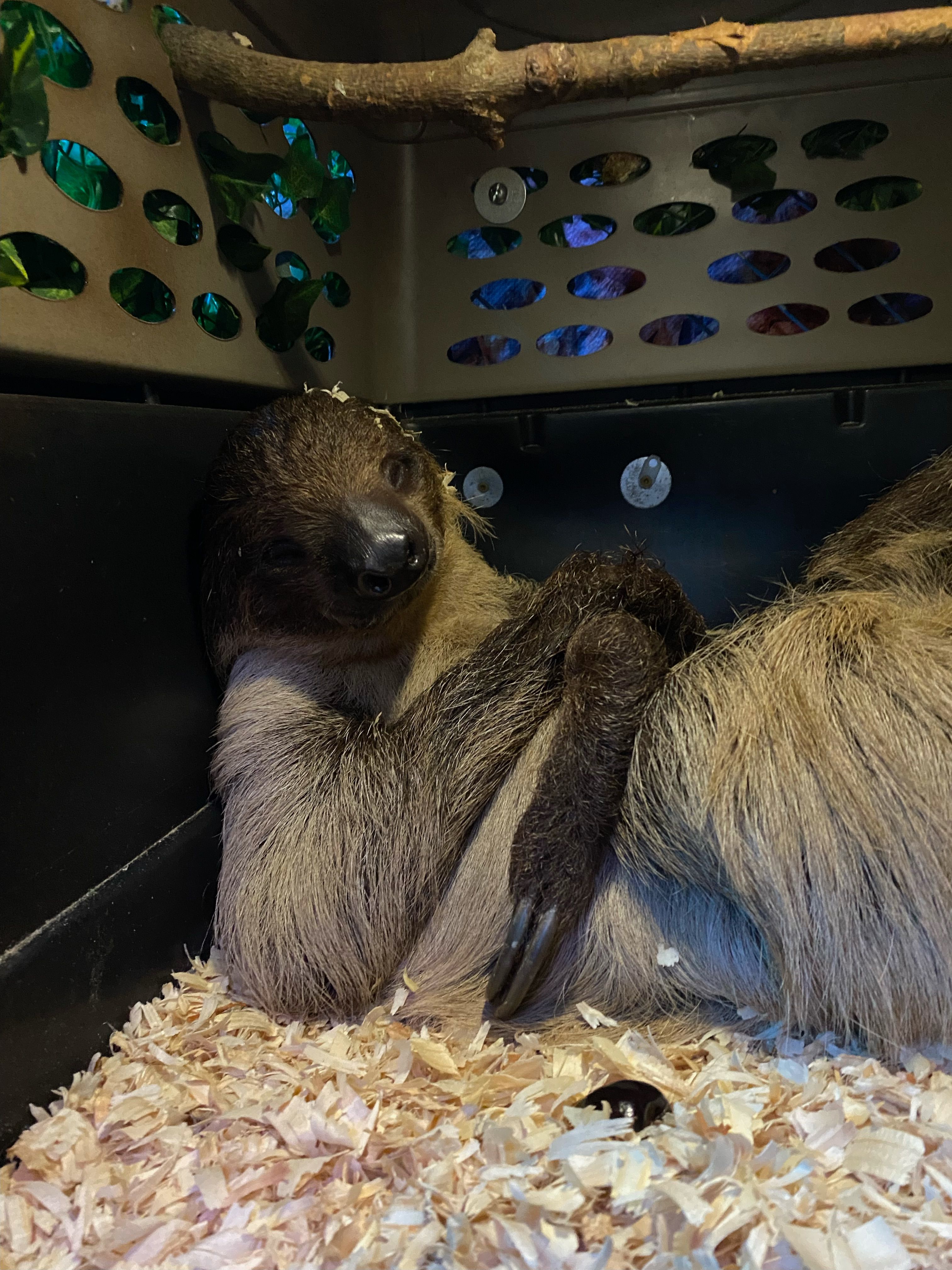 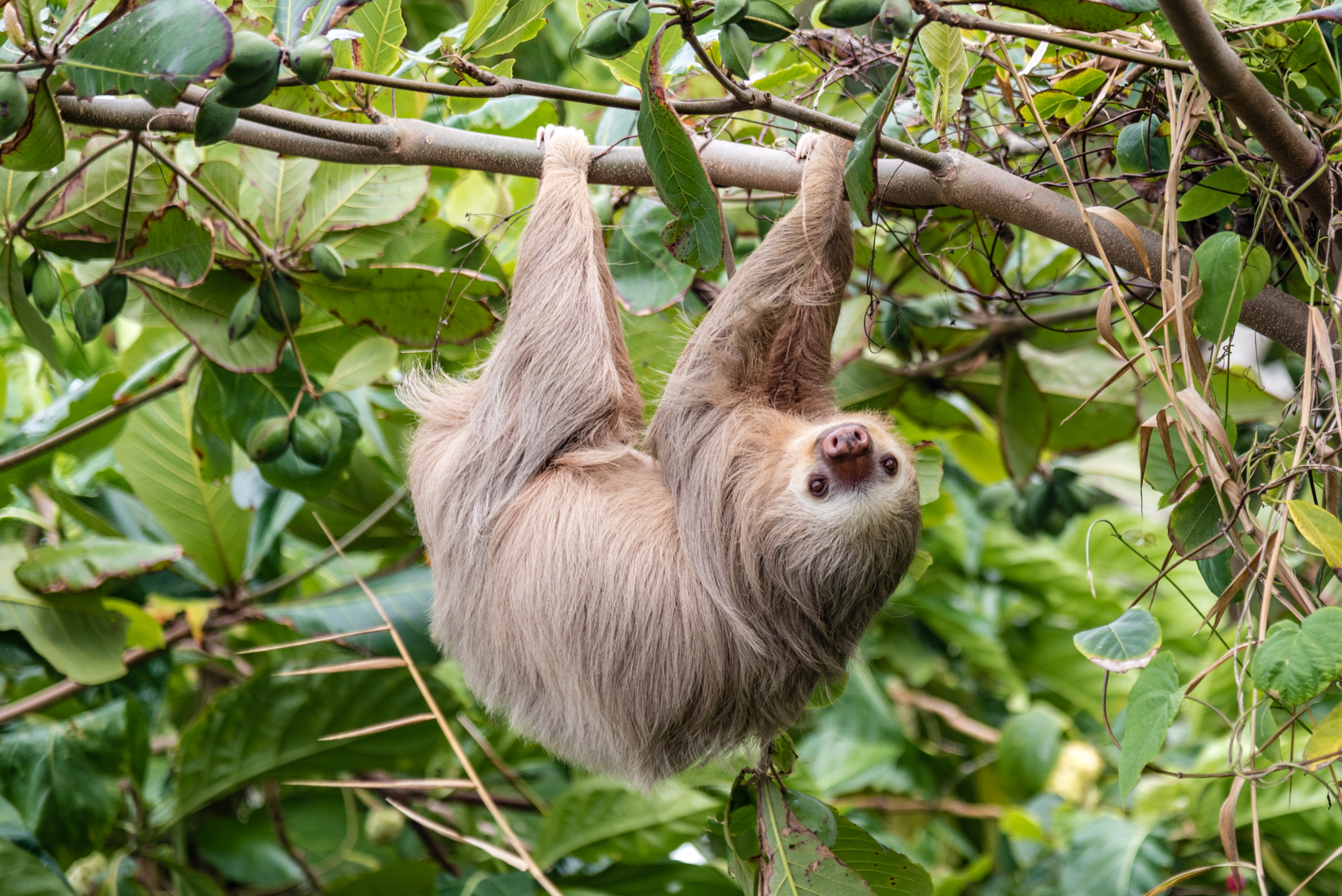 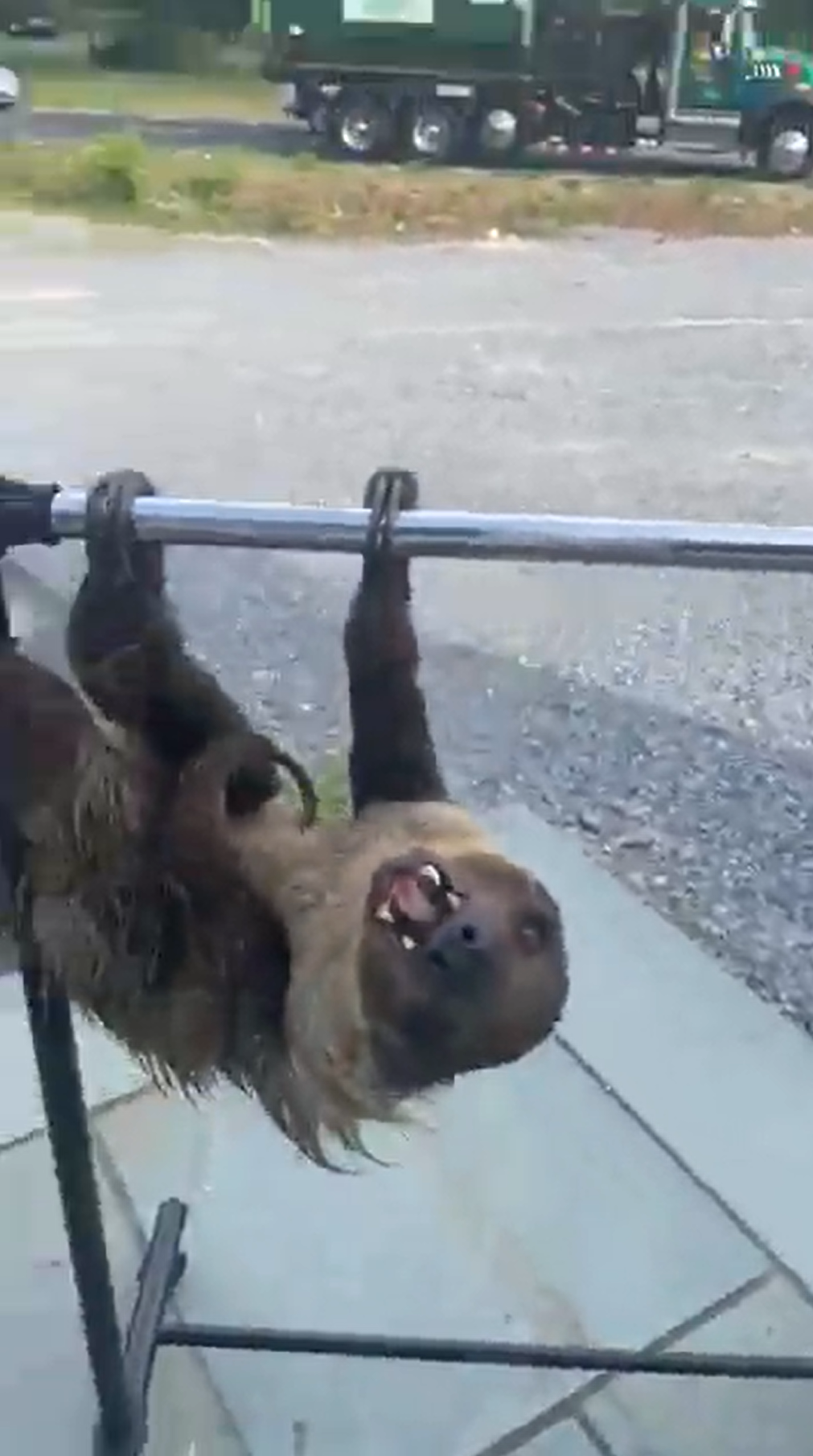 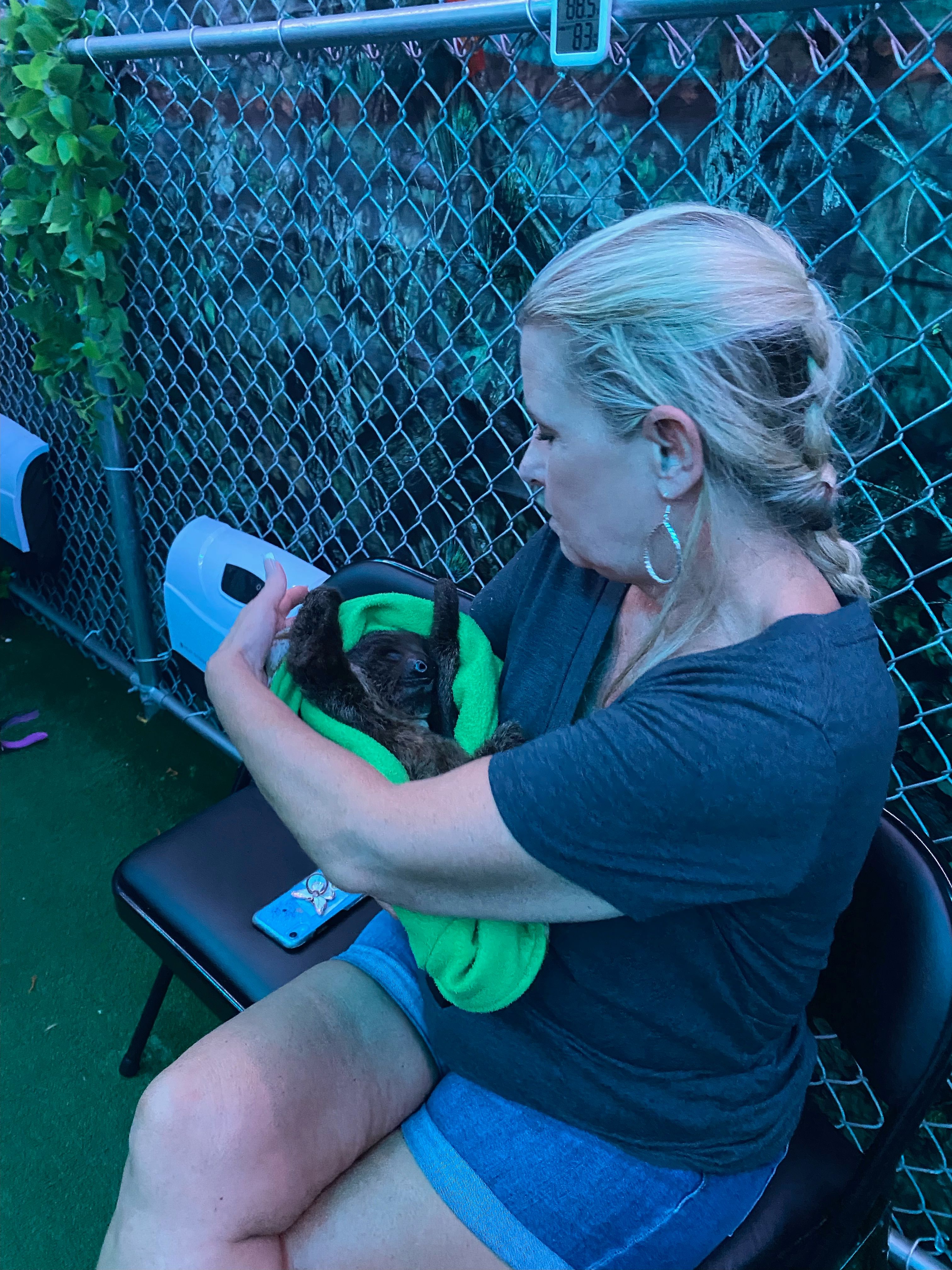 Top: A mama and baby two-toed sloth at a rehabilitation center in Costa Rica after being hit by a car. Photo taken by Suzi Eszterhas, posted on slothconservation.org.
Bottom: A baby two-toed sloth being held by a visitor at Sloth Encounters Long Island who regretted the experience and contacted Humane Long Island.

Sign and share our petition to urge Islip to take emergency action to shut down Sloth Encounters before more people or animals are hurt.

Then join our Action Team to learn about more opportunities to help sloths and other animals suffering on Long Island.

If the people in the animal world weren't so cuckoo, we would get away with so much!

Don't let Wallach con you. To file a complaint about Larry Wallach or Sloth Encounters with Humane Long Island, e-mail us at [email protected].