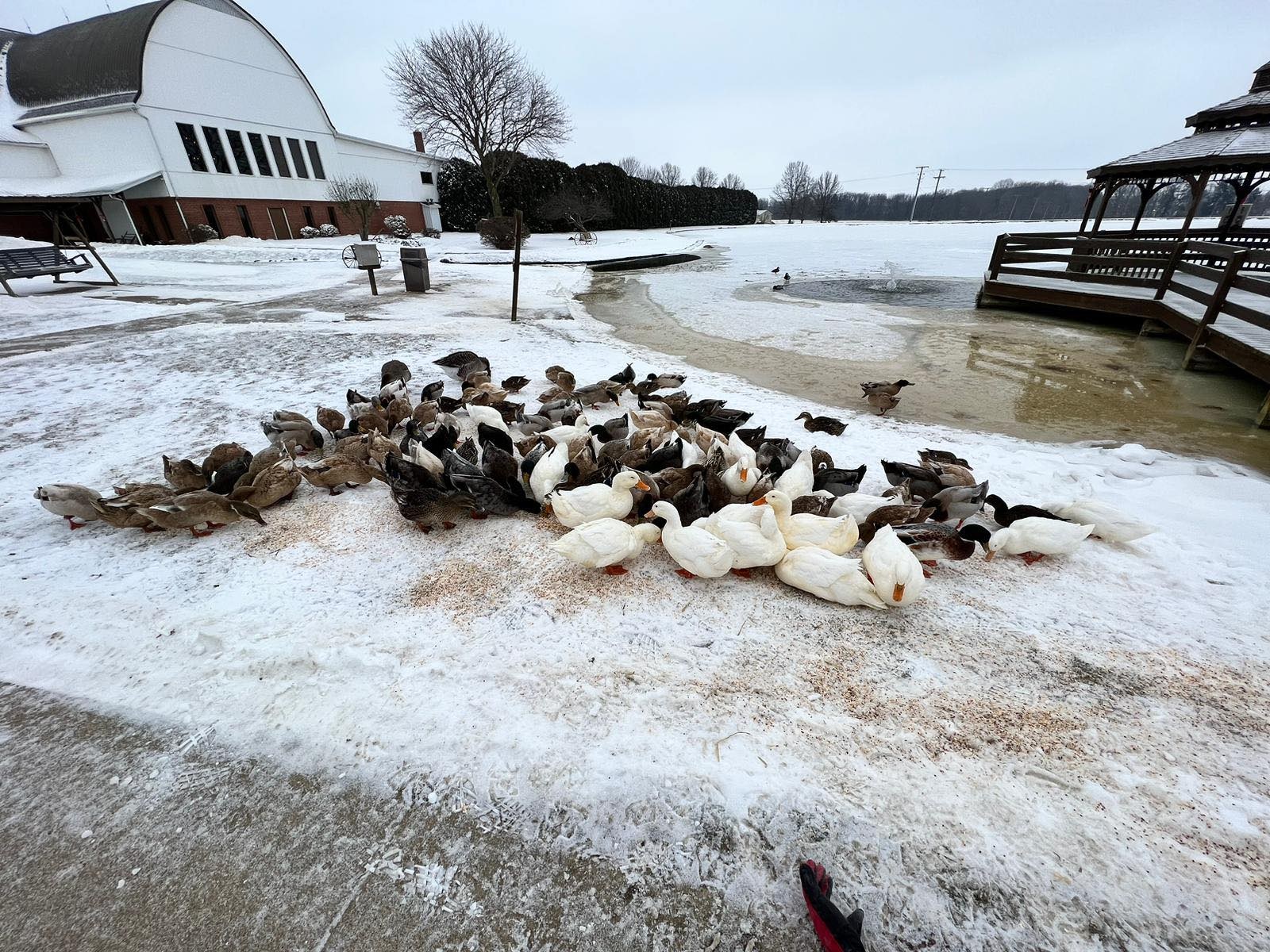 Plans are underway to rescue more than 100 domestic ducks abandoned outside of The Barn Restaurant in Smithville, Ohio after Wooster residents Maiara and Helder Bertolucci braved thin ice to rescue two ducks frozen to the icy pond outside the restaurant on Christmas Eve. The frozen Pekin ducks, now named Olaf and Elsa — after characters in Disney's Frozen — miraculously survived being frozen in place thanks to their rescuers and are now recovering at the Bertolucci's home in Wooster.

Restaurant owner Mark Dravenstott called an appeal from Humane Long Island's Duck Defenders project an "answer to my prayers" after the number of abandoned ducks outside his restaurant had grown unmanageable, culminating in the near-fatal incident this holiday season. He recalled that other ducks have been hit by cars after well-intentioned people left feed near the roadways, whilst his business has spent countless dollars to keep them fed. The Barn Restaurant immediately agreed to cooperate fully with Duck Defenders within minutes of our contacting them about this issue and is cooperating fully with rescue efforts. The Barn will work with us to urge people to stop dumping ducks on the property, both verbally and through signs to be provided by Duck Defenders! Please consider thanking The Barn Restaurant on social media!

John Di Leonardo, anthrozoologist and president of Duck Defenders, says "Domestic ducks are thinking, feeling individuals, not school science experiments, Easter props, or objects to be discarded like trash. Abandoning domestic fowl is cruel and illegal, and no different than abandoning a dog or a cat. When they're abandoned to fend for themselves, they often freeze to death, starve, or are killed by predators, as they lack the skills to adequately forage and the ability to fly or migrate. Duck Defenders is grateful for Mark's cooperation and is urging Wayne County residents to stop dumping ducks at The Barn or any other location."

When introduced into nature, non-native species disrupt natural ecosystems, which rely on the migratory behavior of wild ducks and geese and the natural recovery period that comes with their absence, so once the domestic ducks are rescued, those accustomed to visiting ducks at The Barn should expect to see lots of wild waterfowl replace them.

Ohio-based rescue Good Sprout Rescue and Sanctuary is now planning a large-scale rescue effort to relocate all of the domestic ducks — which include Rouens, Swedes, Pekins, Buffs, Runners, and Cayugas — to reputable homes and sanctuaries in the coming days. Those interested in potentially adopting a flock may contact [email protected] to apply. Homes need to be within code for keeping ducks and be willing and able to provide proper food, an area for swimming, predator-proof/climate-proof night-time shelter, and access to veterinary care. Homes will also be required to sign contracts attesting that they will not breed, sell, or consume the ducks for any purpose.

Maiara Bertolucci, who rescued Elsa and Olaf, says, "I would like to thank The Barn Restaurant for letting us give these ducks the food, medical care, and home they need, just like any other domestic animal, and to all the rescues who stepped up to help these ducks! I know how a lot of people can turn a blind eye to a suffering animal, but not me. I love animals and I believe they deserve to be treated well. They have feelings and they are capable of loving just like any human being, or a cherished dog or cat. Let’s remember the adage 'adopt don't shop' applies to all animals and stop purchasing and dumping them!"